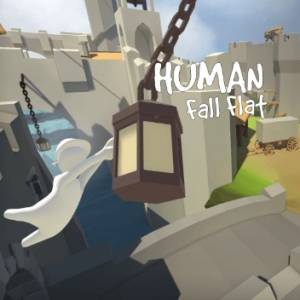 User rating:
All an official info
Download:
humanfallflatgame.com is not an official representative or the developer of this application. Copyrighted materials belong to their respective owners
Get Game 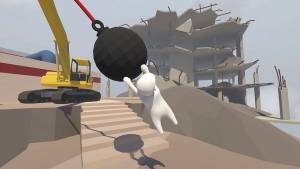 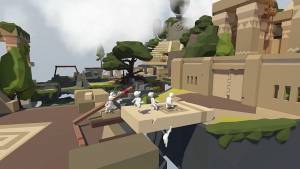 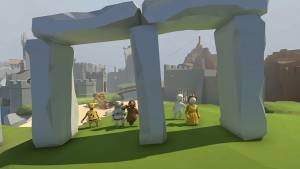 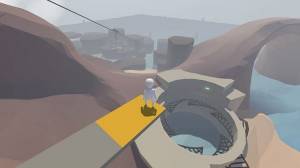 Human: Fall Flat for Xbox One and other platforms is a game in which you have to beat levels one by one, fighting with dodgy controls, gravity, and treacherous physics. It's based on slapstick comedy and tricky puzzles solving. Only even the simplest of tasks are hard to fulfill when your spine and bones are made of gelatin.

Human: Fall Flat Gameplay: the squishier they are, the harder they fall

Human: Fall Flat is all about pain. Which you don't have to feel, luckily. Otherwise, you'd have to stuff your face with painkillers because here you will have to experience all sorts of traumas: 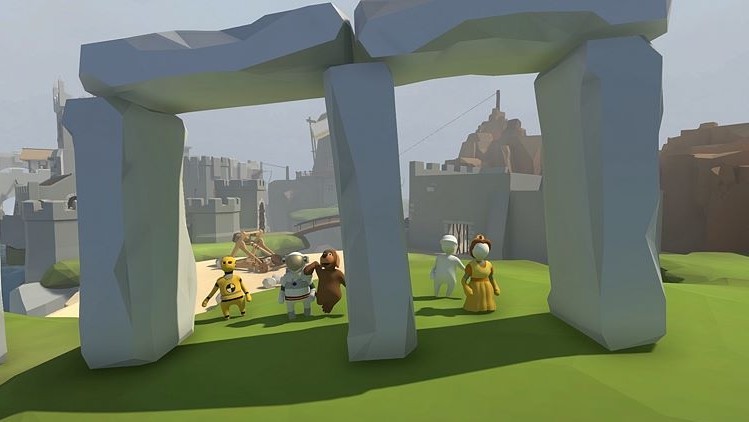 Seriously, danger lurks everywhere in this game. And by downloading Human: Fall Flat you sort of make a ridiculous death pact. See a door with the green Exit sign? Open it to dive into scary low-poly nothingness. A red door that possibly contains a key to beating a level? Unlock it to get hit with boulders and lose a fat portion of progress.

However, it's not that gloomy as it seems at first. Puzzles are actually clever, requiring you to build various contraptions and carefully analyze clues (including audio hints). That cognitive challenge together with Octopus Dad-like goofiness, thrilling high jumps, and bruising stunts evoke an appetite for that bone-crushing adventure within you. If only the doughy men had any bones.

Graphics: the color of pain

Perhaps what will enthrall you about HFL is its skin-editor. Imagine a 3D figurine made of hygienically white clay, which you can paint any way you like, using an app similar to MS Paint. Apart for premade costumes - policeman, fireman, some guy in a yellow jumpsuit -, you can design your own.

And your fantasy won't be limited at all. It can be Deadpool with a shamelessly visible butt-crack, a sociopathic clown with a tomato nose and a black-eye, Pringles mustache man, dressed as a somber roofer, etc. Just make sure you're plodding enough.

Along with the doughy main character, everything else even in Human: Fall Flat for Windows  (7,8,10) looks low-textured. There are no details, nuances and pleasant visual trifles whatsoever.

But the game doesn't become repellent because of such rustic aesthetics.  On the contrary, it feels like a silly and bizarre dream from the childhood, in which you are made of boiled noodles, can't fully control your body, but you have to run from someone. And it feels ok-ish all of a sudden.

On the contrary Human: Fall Flat for PS4 allows deeper immersion into the game, for the thumb-sticks provide better feedback when you interact with objects and environment.

Over the time re-tries and knavish controls may turn this kooky carnival of traumatic experience into a buzzkill. Our Human: Fall Flat review strongly recommends you to call a friend to let the doughy man finally escape his nightmare.

E.g. in Human: Fall Flat for Switch you can detach Joy-Cons, re-sync them with your Switch and enter the split-screen mode. It's a superb way to prove to critics that judging from aside is easier than handling the biz personally. And also an infinite resource for decent trolling.

Some puzzles in HFF may force you into long, long head-scratching. We'll give you a couple of ideas to use, but remember: this game is about experimenting and improvising. So the right solutions are only those that work.

On the medieval level, you will be provided with a catapult and a pile of boulders to crush the castle wall. That operation may become quite arduous and lengthy so place yourself in the catapult and launch yourself to land behind the wall instead.

Climbing can be more efficient:

And for those, who prefer to be fast and furious:

If you manage to obtain a hook (it looks like a big cane), you can use basically any wire as a zip line. It can take you through the level, and all you need to do is to choose the angle accurately.

If a windmill is featured in a level, you can use its whips for transportation. Jump on or hold on to one of the windmill whips and wait until you're high/low enough to jump to your destination.

The game grants you a privilege of operating heavy machinery. A bulldozer, equipped with a wrecking ball to be precise. Gain enough of momentum by swinging the ball and do the necessary wall-smashing.

There is a motor boat that you can get into your possession, but you'll have to row your way to it on a regular boat with paddles first. Rowing is done through Look up/Look down mechanics. But after you get the motorboat, you can hijack a whole ship - it's controlled with two red levers.

VII. Big Fan of Yours

Occasionally you'll stumble upon giant fans. They are powered by special furnaces that in turn must be manually fired up by you with chunks of coal. The giant fans are like iFLY indoor skydiving simulators and they'll propel you into the air NASA-style.

Human: Fall Flat isn't the easiest slapstick game. It's shaky, wobbly and wiggling. Its controls are far from being friendly and at times you'll be frenzied with your ineptitude to make the doughy guy do one simple move. And there is no Human: Fall Flat for mobile devices.

But at the same, it's funny, especially if a friend of yours joins the game and you can tease, troll and pester each other. And when you finally manage to achieve a seemingly unachievable goal - the experience becomes truly cathartic.

These links follow to the webpage, where you will find links to official sources of Human: Fall Flat game. If you are Windows PC/Mac/XONE/PS4 user, then just click to button below and go to the page with links. Please note that this game may ask for additional in-game purchases and permissions when installed.

Get Game
Download Human: Fall Flat Review for Free
Download it
Human: Fall Flat Custom Skins
Order Now
Latest Posts
By continuing to use this site, you agree to our use of cookies, which we use to improve our content, analyze site performance and to deliver personalised content. Click here to learn more.
Accept